Welcome to The Story Continues, the blog of children’s book author Eileen Beha. 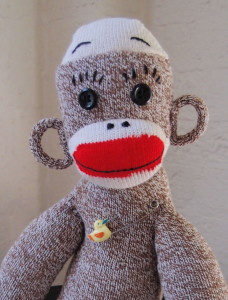 Hi! My name is Mr. Throckmorton S. Monkey. I’m a red-heeled sock monkey and one of the main characters in Eileen’s new novel for middle-grade readers, The Secrets of Eastcliff-by-the-Sea: The Story of Annaliese Easterling and Throckmorton, Her Simply Remarkable Sock Monkey.

Eileen had so much fun writing about me and the other Easterling family sock monkeys that she’s invited us to come along on her on-line writing journey.

At first, we sock monkeys existed only in Eileen’s imagination, but after the book was finished, her dear friend Millie Dosh, a talented seamstress, brought us to life. 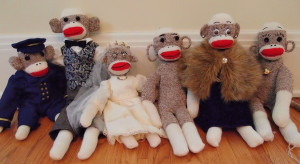 Members of the Sock Monkey Family

Recently Eileen was tagged to take part in an author blog tour. Let’s hear what she has to say . . .

MY WRITING PROCESS: A BLOG TOUR! By Eileen Beha

Many thanks to Nancy Loewen for inviting me to join this blog tour, in which authors and illustrators share something about their writing process and latest work.

I had the privilege of getting to know Nancy when we were students in the MFA Program in Creative Writing at Hamline University. To this day I can remember reading the early drafts of her beautiful short story, “Harvest,” recipient of the 2006 Associated Writing Programs Intro Journal Award and published in the Mid-American Review. Nancy’s book-length manuscript, a young adult novel, was selected as “Outstanding Fiction Thesis” when we graduated in May, 2007. Not only is Nancy a talented writer across multiple genres, but she’s also a wonderful mother, devoted daughter, and blessed with a kind and generous spirit. Baby Wants Mama, her latest picture book, is absolutely delightful!

What am I currently working on?

At 4:17 p.m. on Monday, June 16th,I sent an email to Lauren Rille, Associate Art Director at Simon & Schuster, requesting eight last-minute text changes to The Secrets of Eastcliff-by-the-Sea prior to its release by Beach Lane Books on August 16, 2014. So, I’m finished!  At the moment, I’m breathing a deep sigh of relief, knowing that the book I started writing in January of 2008 is finally going to print.

I’ve also just started the process of revising my first and yet unpublished middle-grade novel, Don’t Call Me Carrot. Using a writing journal, I’m exploring ways to transform a minor character into a major character, and perhaps the book’s structure into a dual point-of-view.

How does my work differ from others in its genre?

My two published middle-grade novels have been described as “classic” in style, each bearing the literary characteristics of an old-fashioned tale. Both books feature a multigenerational cast of characters and two interacting, somewhat timeless worlds: a realistic world with human characters and an imaginary world inhabited by anthropomorphized animals (living and stuffed).

I’m challenged by story structures that force me to take risks with point-of-view. Told by omniscient narrator, Tango: The Tale of an Island Dog shifts perspectives between three animal and two human characters. The point-of-view in The Secret of Eastcliff-by-the-Sea – third person limited omniscient – is further constrained by the fact that Throckmorton is inanimate; he can think, see, hear and smell, but he can’t move.

Why do I write what I write?

I fully intended to write adult fiction when I enrolled in the MFA Program at Hamline. Then in the summer of 2002, I took a 2-credit course, Writing the Middle-Grade Novel, taught by Kate DiCamillo . Noting that I had a suitable “voice,” she encouraged me to attend the bimonthly writer’s workshops for writers of children’s literature led by Jane Resh Thomas , which I did for almost 10 years. Now, I’m motivated by the desire to have one of my stories positively influence a child’s life in the way that my favorite book, Anne of Green Gables, influenced mine.

How does my writing process work?

The most effective writing process that I’ve ever used sounds simple: sit in the chair and do the work. Back in the day when I was a special education teacher, we called it “time on task.” And hard to do when “life” so often gets in the way.

Five other writing processes work well for me.

One, I keep a writing journal for every book that I’m writing, or thinking about writing someday: a scrapbook of character sketches, freewriting, clustering, newspaper clippings, magazine pictures, poems, photos, or anything else than resonates with me as I contemplate a story. 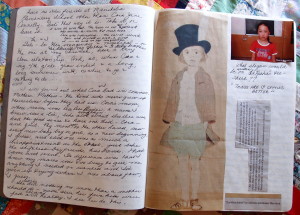 I also use a modification of a method called “dreamstorming” that I learned in a week-long workshop with Pulitzer Prize-winning author Robert Olen Butler, as described in his book From Where You Dream . Butler proposes that fiction is the exploration of the human condition with yearning as its compass. Creating a mental collage, I allow my imagination to take me all over the novel, beginning, middle and end, in no particular order, focusing on sensory details, which I record, but don’t set into prose for weeks, or even months, later.

Also, when I start a new story, I like to tell myself something that I learned from Jane Resh Thomas: that in the first draft, I’m telling the story to myself. Keeping this front and center in my mind helps me get the editorial critic off my back. I ask myself, “And then what happened?” and move on.

Revision, says author Janet Burroway, is the heart of the writing process — revision not just in the traditional sense of improving a word choice, or cutting a scene, but in the sense of re-envisioning the entire work, being open to new meaning. And the only way that I know how to re-vision a story is to write tons and tons of pages that I know I’ll have to discard: a mock diary written by the protagonist, a fake interview with the antagonist, or a scene rewritten from the points-of-view of all secondary characters.

Finally, I always, always read my work aloud, word for word, after every major revision – and never fail to be surprised by how much revision that I still have left to do.

Next up on the blog tour: Mary Losure.

I first met Mary at a writer’s workshop with Jane Resh Thomas about ten years ago and we’ve been writing colleagues and friends ever since. I’ve had the privilege of reading drafts of all four of her published and soon-to-be-published books for children. The Fairy Ring: Elsie and Frances Fool the World and Wild Boy: The Real Life of the Savage of Aveyron  are narrative nonfiction, published by Candlewick Press. Her new book, Backwards Moon, a fantasy for ages 7 – 10, will be released on September 15, 2014 from Holiday House.

An award-winning writer, Mary is passionate about words and the power of story, whether real or imagined. I also hear that she plays a mean mandolin.