Eastcliff-by-the-Sea, the manor house and estate where Annaliese Easterling’s family lived, was inspired by an operating inn with a similar name — Dalvay-by-the-Sea — located on Prince Edward Island.

On each of my many visits to Prince Edward Island, I made a special point to “do lunch” at Dalvay, always ordering the same thing: steamed Island mussels fresh from the sea, bread hot from the oven, and sticky date pudding with toffee sauce. 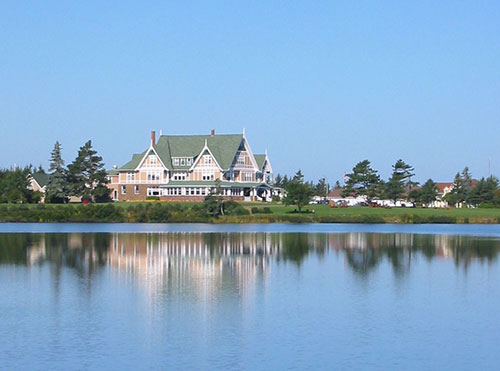 In my imagination I lifted Dalvay — a Canadian National Historic House built in 1895 — and placed the majestic structure on the northeastern coast of Maine on “a high cliff above a frozen sea — far, far away from it all.” Unlike Dalvay, in my story Eastcliff-by-the-Sea is “old and not nearly as fine as it used to be.”

It was never my intention to include “Eastcliff-by-the-Sea” in the title of my book. However, late in the editorial revision process, the Marketing Department at Simon & Schuster decided they wanted a different title, departing from my original choice, Throckmorton: The Story of a Simply Remarkable Sock Monkey. My editor favored inclusion of the setting’s name and characterization of the book’s plot as a mystery. Thus, a new title was born.

Learn more about, and see pictures of, Dalvay-by-the-Sea. Note the Anne of Green Gables video connection, also the fact that the original Dalvay estate had horses, a stable, and carriages.

Here’s a rich history of Dalvay-by-the-Sea, including two granddaughters who became princesses!

Did my mention of sticky toffee pudding make your mouth water? Here’s the recipe!