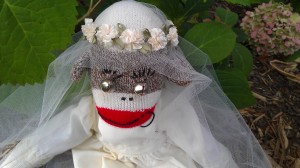 As a child, I often felt invisible.

Like a homely, hand-sewn sock monkey named Miss Beatrice, I often smiled on the outside while tears of sadness and confusion soaked the red felt heart tucked inside my body’s soft stuffing.

Worrisome dramas of adult life unfolded in front of my veiled eyes and played themselves out behind my back; unfortunate events often set in motion by the ringing of a black, rotary-dial telephone on a paper-cluttered desk in our family’s cramped kitchen.

Conversations were never private; my mother’s tone of voice was a dead give-away that the news coming from the other end of the line was bad. She’d shoo me away with a flick of her wrist, but I’d sneak into our only bathroom, right next to the kitchen, and press my ear against the door, straining to eavesdrop on every word.

Rarely would Mom explain anything. I was told only the most cryptic details: Great-Aunt Ida had a heart attack shucking sweet corn for supper; poor Uncle Fred died of grief, the butt-end of his cigar still plugged in his mouth; Cousin Lawrence, an up-and-coming baseball star, has an inoperable brain tumor; it’s our turn to take care of your sick grandmother – no one else wants her; Aunt Anita has skin cancer, terminal; the homestead family farm is being sold.

Why? Why? Why? I wanted to ask anyone who might answer.

When? Where? What happened? I’d pester anyone who might know.

I quickly learned that ‘children are to be seen and not heard’.

Looking back on my recently published novel for middle-grade readers, I realize that it was this very sense of invisibility and powerlessness that I was trying to capture when I created a family of inanimate sock monkey characters in The Secrets of Eastcliff-by-the-Sea. The sock monkeys share my childhood frustrations:

“You know how it is with us monkeys,” Captain Eugene lamented. “We observe. Then our keepers move out of range. We may hear the beginning, middle, or end, but rarely do we hear a whole story. It’s really quite frustrating.”

“Sock monkeys should get to live their own stories,” Sir Rudyard asserted. ”What good is seeing and hearing and smelling if we can’t do anything?”

“If I had a choice,” said Miss Beatrice, “I’d rather be someone than do something.”

Fortunately, as I made clumsy attempts to live and shape my own story – to be someone – I discovered the power of classic books with strong themes and admirable characters: Anne of Green Gables, Call of the Wild, Black Beauty, National Velvet and Little Women. 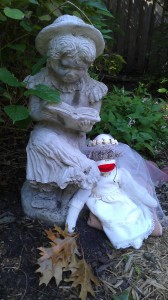 Stories with a beginning, middle and an end.

Stories that revealed not only what happened, but why.

Stories peopled with characters that became real because I was able to eavesdrop on their souls.

Stories that sketched clearly the inexplicable adult world as seen through a child’s eyes.

Stories that didn’t hold back the truth.

Slowly, the chaos and confusion within my young mind and soul got woven into a pattern with some semblance of order. Through the magic and mystery of story, I learned that there was always room for hope.

Recently, my daughter-in-law Lynn posted a photo of our nineteen month-old grandson Albert on Facebook with the caption:

Today Bertie put together two words for the first time ever. “Read book.” My heart exploded. Well worth the wait and our middle of the night rendezvous.

My heart exploded, too.

What better words could a grandmother – a writer – ever hear? What better way for a young boy to learn about who he is and what he’s capable of becoming? 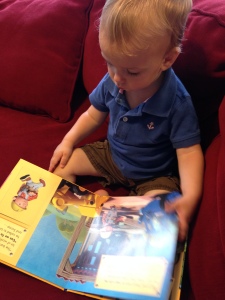