One of the great pleasures of this past summer has been rereading the works of Pat Conroy, a quintessential storyteller and one of my favorite authors of adult fiction. The Water is Wide, The Great Santini, The Lords of Discipline, The Prince of Tides, and Beach Music hold a special place in my heart, and also on my bookshelf. 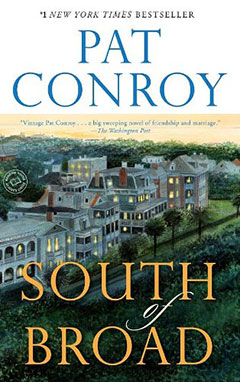 In early September, at the time when Hurricane Irma was thrashing coastal South Carolina, I read for the first time one of Conroy’s later works, South of Broad, set in Charleston. Ironically, the climax in South of Broad takes place during Hurricane Hugo in 1989. I also rediscovered one of my favorite cookbooks, a signed copy of The Pat Conroy Cookbook, a gift from my daughter. Not only does the cookbook feature one of our family’s favorite recipes, “Summer Chowder,” but also includes a collection of personal essays by the author about the art and joy of cooking good food.

“A Recipe is a Story …” is the title of the cookbook’s seventh chapter, and I include, for readers and writers alike, a few of his observations from pages 96-97:

Stories have always hunted me down, jumped out at me from the shadows, stalked me and sought me out, grabbed me by the shirtsleeves, and demanded my full attention. I’ve led a life chock-full of stories, and I know now that you have to be shifty and vigilant and ready to receive their incoming fire. Sometimes it takes the passage of years to reveal their actual meaning or import. They disguise themselves with masks, disfigurements, chimeras, and Trojan horses . . .

Alertness is the requirement of the writing life, staying nimble on your feet, open to the stories that will rise up and flower around you while you are walking your dog on the beach or taking the kids to soccer practice. The great stories often make their approach with misdirection, camouflage, or smoke screens to hide their passage through your life . . .

But sometimes stories hide themselves from writers like trolls under bridges. Then the writers of the world must keep their bodies attuned for the sudden appearance of the story that is powerful enough to change their stories and their lives. They must train themselves to recognize the divine moment when a great story reveals itself.

I was so saddened when this great author passed away on March 4, 2016, my 67th birthday. But still, I thank him for his compelling and beautifully written stories, for signing my copy of his cookbook, and for sharing his recipes and life wisdom.

From: The Pat Conroy Cookbook

Serves 4 as a main course or 8 as a first course.